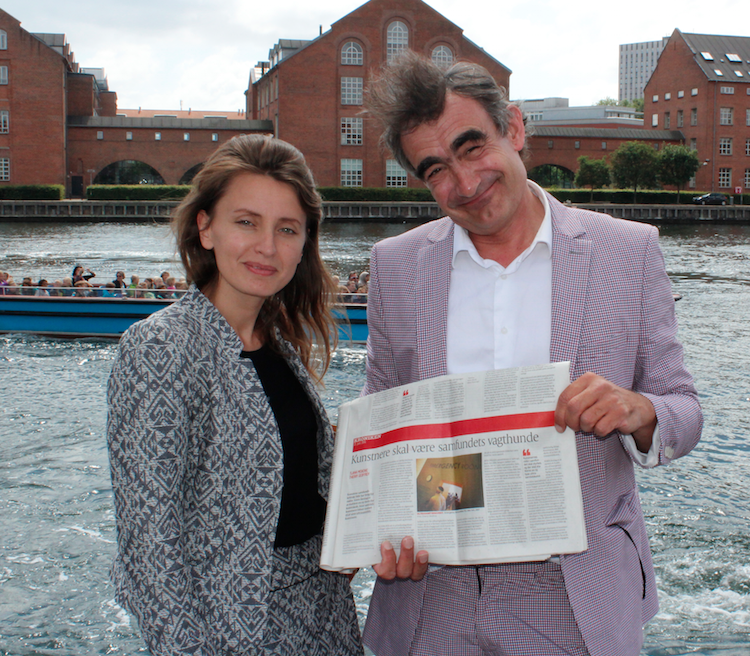 THE ACADEMY OF EMERGENCY ART believes that artists are thermometers for detecting, measuring and giving diagnosis of the dysfunctions in the society. Artists are experts in capturing alarming issues immediately or even in advance. They have the ability to spot and unveil what may be an issue tomorrow and have important implications for our future. In order for these important artistic visions to reach a large attentive audience as fast as possible, what artist feel NOW has to be produced and communicated in real time – before it is too late.

THE ACADEMY OF EMERGENCY ART will train artists to work in time, do artworks intervening with the society and have an impact in the development of the actualities of today. The goal is to train artists to express about emergencies in sync with time, before it is to late.

The logic behind THE ACADEMY OF EMERGENCY ART is based on an internationally recognized art format EMERGENCY ROOM also developed by Thierry Geoffroy/ COLONEL. It is and specially designed space for exhibitions changing every day, where professional artists are stimulated to express and rank the most alarming emergencies of today.

A text for Danish newspaper Politiken co-written with Thierry Geoffroy, published June 23 2014. The text is introducing the visions for THE ACADEMY OF EMERGENCY ART and explaining its potential. The article can be read  on-line HERE June 25 2014, a follow up article about the academy was published in Politiken by Camilla Stockmann. The article was discussing different art porfesionals’ opinions about THE ACADEMY OF EMERGENCY ART, among others Jesper Rasmussen, rector at Jutland Art Academy, Sanne Kofod Olsen new appointed rector at The Royal Danish Academy of Fine Arts and Merete Jankowski,  Director at Overgaden – Institute for Contemporary Art. The article can be read on-line HERE June 26 2014 the debate program Meningsmaskinen at TV2 Lorry, organized 30 minutes  live-broadcasting about THE ACADEMY OF EMERGENCY ART with Tijana Miskovic – MA in Art and Theory; Merete Jankowski, Director at Overgaden Institute for Contemporary Art; Jon Stephensen, director of  Aveny T and Mads Quistgaard, affiliated professor at the acclaimed Kolding School of Design. The debate can be seen on-line HERE

A petition is started in order to take THE ACADEMY OF EMERGENCY ART on a political level, because we believe that artists can be trained to become experts in being critical in time with their precious intuition enabling them to to alert us about dysfunctions in the society before it is too late. If you want to support this vision please sign our petition on following link: HERE

In the following days a vivid facebook-debate developed where different voices where among other Per Aage Brandt, Jan Bäcklund, Mike Watson and Thierry Geoffroy are trying to reflect about new terms and concepts created by the vision of ACADEMY OF EMERGENCY ART.  Follow and join the debate HERE

An article by Maria Teilgård and Anton Bech J. from FUKK created a new wave of debate on KUNSTEN.NU