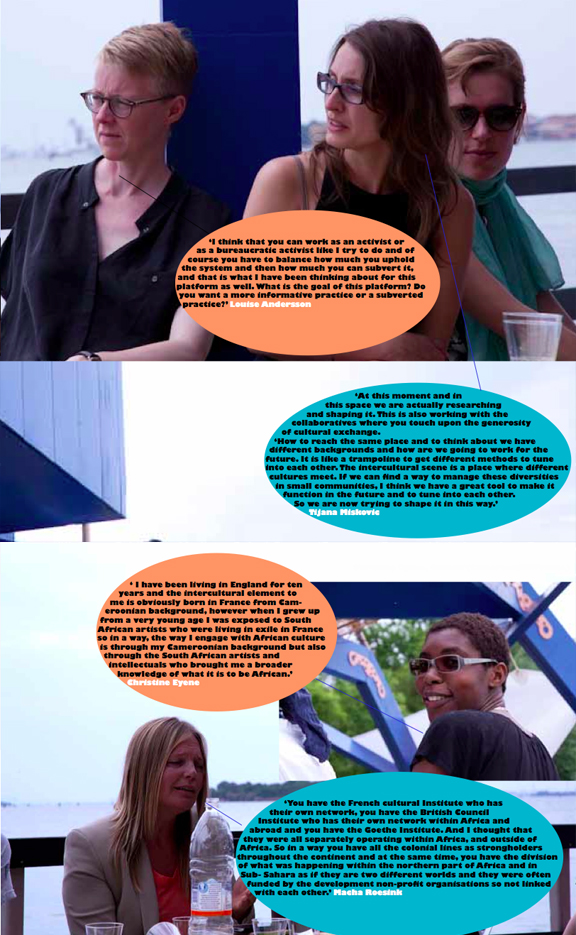 “What are the components needed to create a good platform for intercultural dialogue and art?” A round table discussion at Osloo/Danish pavilion in Venice Biennale

Prior to working as an independent curator, Eyene was consultant for PUMA from 2008 to 2010. In this role, she developed the initial phase of the website Creative Africa Network with Raphael Chikukwa, Curator of the National Gallery of Zimbabwe!, and Macha Roesink, Artistic and Managing Director at Museum De Paviljoen and fostered the partnership between puma.creative and the 8th Bamako Encounters (2009). She will continue her collaboration with Mr.Chikukwa to produce Gwanza- Month of Photography in Zimbabwe, 2011.

Johann van der Schijff is an artist living and working in South Africa. He is a senior
lecturer at the Michaelis School of Fine Art, University of Cape Town. Growing up in South Africa, questions of power relations in society underlie much of his work, forcing the viewer into a position of choice in their engagement with his artworks. He is currently guest artist in residency at the Thamgidi Studio Foundation in Arnhem, The Netherlands.
The CPBs project (Cape Town) addresses challenges of co-existence faced by communities from different cultural backgrounds, by means of art teachers and school children workshops and an exhibition consisting of drawings, paper cut-outs designs and punching bags. Because of the historical links between South Africa and The Netherlands, the second CPBs project aims to explore the parallels that exist between these two countries in dealing with cultural diversity, culminating in a curated exhibition (Sithabile Mlotshwa).

Writer and associate professor in human sciences based in Beirut. His main interests include the relations between scientific discovery and contemporary art practices and the dynamic logical and predictable shift of art’s locus in contemporary artworks.
During the 54th Venice Biennial, Georges H. Rabbath will present the project Allegora, Lebanon a state of mind. This project is operating outside the official Biennial channels as the Lebanese pavilion was cancelled. Allegora addresses the notion of chaos and how cultures in extreme difference can live together. Moreover, artists are asked to channels the idea into the creation of a meta-narrative of a country and what this could mean. Allegora spans over the next three months, where artists have also been invited from Ethiopia, Denmark and others to participate and create works in dialogue and collaboration in Beirut.