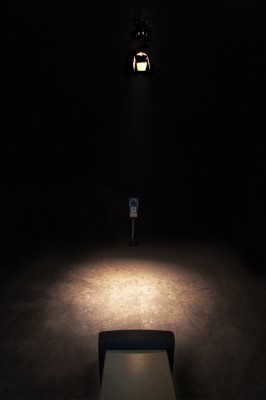 This, somehow minimalist art work “BFBS92” is based on the attempt to try to extract from social life, if we can say a irrelevant part (in this case chess match Fischer/Spassky played in 1992 in Yugoslavia (Serbia and Montenegro at the time)), and in a slightly abstract form transferred in to the showroom, with the intention that in the context of a new space in which existed, a maximum of experience that this event reflects on the political world of today will be extracted.

The work is basically an audio script of a moves from first game of chess match Fischer / Spassky from `92. Divided into two stereo speakers, alternately from each speaker one of two voice call moves for one of the this two players. Due to the lack of physical existence of chess board or chess pieces in the exhibition space, whole game takes place in our minds like a game of blindfold chess 1*.

Unfortunately, this leaves room only for trained players, to follow this chess game to the end , while the greater part of the audience will soon lose track of where the figures are deployed. In my opinion similar situation we have in modern society where, even if we are all relatively “well” informed about political situation in the world, we still get only fragments of a bigger picture, and we will not be able to assemble whole picture for a simple reason that we were not trained for that, or because we do not have the necessary experience, or maybe just not hundred percent committed to that problem, etc. The information in the media are often stripped of context, apart from “any” position, and often reduced to the level of chess moves, all in the name of”objective” information (only applies for proven true information). That gives us a false feeling of security, that nothing is hidden from us, and to avoid spoiling that same experience, we honestly do not want anything more than information that have been served to us. We are not really interested in “Big Picture”, but truly believe that we know all about it, or we could know all about, just if we really want.

On the other hand, equally important moment for me in this work was the selection of specific chess game, in this case match Fisher / Spassky from 92. If their first meeting in 1972, was a “Chess Match of the Century”, the birth of American hero who won over Soviet Union (in the context of :”to beat Spassky is to beat Soviet system, because chess was in the Soviet Union part of the system”), their 92. rematch was the beginning of heroes fall . After playing this game in 92, Fisher broke the United Nations embargo against Yugoslavia, and became a fugitive from the law, and almost until the end of his life, a man without a country. Simply heroes of the Cold War were no longer needed 2*. And that is simply because that was just about a time of the end of the Cold War, disintegration of the Soviet Union,(also Yugoslavia), and the beginning of a new and perhaps even more paranoid times that we live today, whether we call it “The New World Order ” as George Bush Sr 3*., or what Slavoj Zizek calls “living in the end of times”, or something else entirely. For this reason, this chess game for me is a symbolic link between these two eras, in his own strange way bordering with the beginning of my new life, also as man without a country 4*. This like any other romantic escape into the past is a symbolic critique of today, but if in any point in the future, for any reason, we begin to look at times of Cold War with nostalgia, it’s time to start seriously wonder.

And one final thing, but not irrelevant, is that, that making a cocktail of minor fragments of culture and placing them in the context of global events, with a touch of “conspiracy theory” is a kind of act of paranoia. Is that somehow reflects the delusional constructions of artist, who is often nothing more than a “mirror of society”, or is there a possibility that is part of our collective subconscious?

2* Almost identical situation we have in the case of the Afghan Taliban`s.

3* Now, we can see a new world coming into view. A world in which there is the very real prospect of a new world order. In the words of Winston Churchill, a “world order” in which “the principles of justice and fair play … protect the weak against the strong …” A world where the United Nations, freed from cold war stalemate, is poised to fulfill the historic vision of its founders. A world in which freedom and respect for human rights find a home among all nations. 6.3.1991 George Bush sr. addressed U.S.Congress

4* United Nations sanctions against Yugoslavia (Serbia and Montenegro) have been introduced for reasons of their involvement in the war in Bosnia and Herzegovina, a country that I have to leave for the same reason.