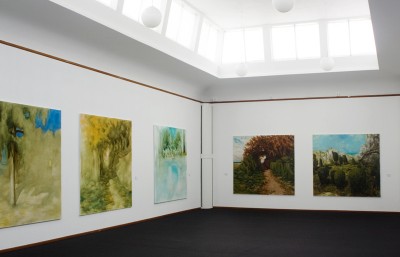 Odey Curbelo can be found at Skive Museum of Art from November 8th 2011 and the exhibition is open to press from November 10th 2011.

In Deep Field Odey Curbelo invites the spectator into a contemplative room of mental landscapes realized in the classical language of painting. The landscape painting as a tradition, with all the references and connotations it instinctively awakens in us, lies as backdrop Curbelo paints on. The paintings seem familiar, at first sight, we’ve seen them before, they represent places that exist in our collective consciousness fastened to the canvass by a succession of Danish painters. But what is actually at stake in these paintings? If one goes deeper into the pictures they seem to cancel out their own concretization of the landscape; on the edge between the recognizable and the unreal they suddenly seem strange, uncanny. The paintings seem to demand the spectator’s own answers to questions, which can only be given after deeper contemplation. It is this challenge to the spectator, with its subsequent reward, the exhibition’s title Deep Field refers to.

The stranger. The artist’s own position is central in this alienation of the known. As a Cuban artist, who works and lives in Denmark, Curbelo stands outside looking in. His landscapes are not like those of the Danish painters of the Golden Age, an investigative and venerative of the domestic, but rather an appropriation of the unknown. Through his landscape paintings Curbelo is painting himself into the Danish. Thus, the pictures question the national once again – who owns that which is ‘Danish’?

The potential of the painting. More than any other artistic medium, the painting allows for a visibility of the creative process and veneration of the medium itself. By insisting on the techniques of classical painting, Curbelo instates his pieces into a long tradition, drawing strong references to art history. Here an appropriation is also being undertaken, fostering something different and alien to the tradition from which his pieces derive. By changing between different painting techniques and approaches, the pictures seem timeless – they are not of one era. Each approach has been duly considered and chosen to conjure the desired ambience in particular. Thus Curbelo fully exploits, that which is precisely this medium – the potential of the painting.

The artist’s curation. Curbelo’s choice of motif and framework of reference is characterized by an open mind and a general visual curiosity to collate motifs across cultures, ages and concepts. To illustrate this ongoing dialogue the museum’s collection will also be enlisted in Curbelo’s solo-exhibition. This will happen through a curatorial approach, where Curbelo selects pieces from the collection of Skive Museum of Art and re-contextualises them in relation to each other and his own pieces. Thus the audience is invited to se something new in already known, older pieces, and to see something familiar in Curbelo’s new pieces.

THE EXHIBITION CATALOGUE CAN BE SEEN HERE

SEE ALSO THE INTERVIEW WITH ODEY CURBELO AT KUNSTEN.NU In addition, Curbelo received a residency in Accademia di Danimarca in Rome, and has collaborated with Düsseldorf Academy of Arts and The Iceland Academy of the Arts, Reykjavik.