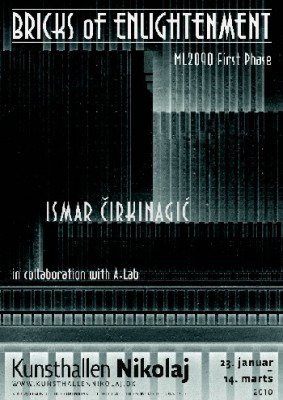 Ismar Cirkinagic in collaboration with A-LAB:
Bricks of Enlightenment – ML2090 First Phase
January 23 – March 14 2010
Nikolaj, Copenhagen Contemporary Art Center, presents the total installation Bricks of Enlightenment – ML2090 First Phase by Bosnian-Danish artist Ismar Cirkinagic. The exhibition is an investigation of how power is staged, taking as its starting point George Orwell´s dystopian science fiction novel 1984.
George Orwell wrote his novel in 1948, inspired by Stalin´s totalitarian regime, and by switching the last two digits of the year in which it was written he came up with the year 1984. Similarly, the title of Ismar Cirkinagic´project ML2090 refers to year 2009 in which it was launched. The letters of the title, ML – an abbreviation of the Ministry of Love – refers to the Orwellian body monitoring the population´s love and loyalty vis-à-vis “Big Brother” in the superstate Oceania. This mostly takes place by using torture and by inducing fear.
Based on thorough artistic research, Cirkinagic, in co-operation with the architectural drawing office A-LAB, has created a unique visualization of a building which normally exists only in the reader´s imagination. The exhibition presents the opportunity to walk around in a scale 1:1 section of the building, assisted by an audioguide for directions, as well as a model of the whole building.
Bricks of Enlightenment is the first phase of the overall project ML2090 which in three instalments intends to examine the staging and functioning of power. Whereas Orwell in 1948 projected Stalin´s Soviet Union to 1984, Cirkinagic, from a current point of departure, wants to take the novel´s dark vision even further into the future: to the year 2090. The aim is to investigate how power systems – whether they are a Western democracy or a totalitarian regime – run the risk of a certain kind of spiritual corruption when the power structure becomes affected by ideas that run counter to society´s basic ideals and which are allowed to take root.
The motivation behind ML2090 is Ismar Cirkinagic´own personal experiences with life under two different political systems. Born in Bosnia in 1973 under Tito´s moderate totalitarianism, he escaped to Denmark in 1992 because of the war.
Cirkinagic graduated from the Royal Danish Academy of Fine Arts in 2006 and works with both photo, installation and painting. The exhibition Bricks of Enlightenment takes place as a collaboration with A-LAB whose co-owner Adnan Harambasic, just like Ismar Cirkinagic, came to Scandinavia as a result of the war in Bosnia.
For press photos and additional information, please contact:
Ms Anne Riber, m: pr@kunsthallennikolaj.dk or
t: (+45) 33 18 17 84.