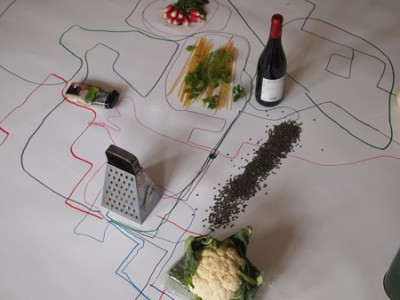 English artist collaboration Townley & Bradby are in Denmark as part of Golden Threads Research Fellowship program , organised by Delta Arts.
This week they are organizing an urban game that will range across the streets of Copenhagen. The game is being realized in collaboration with Lars Mathisen and Tijana Miskovic and hosted by Rio Bravo.

What: A wide-ranging urban game with critical bite

· In the first part of the game, players explore the city alone, but linked to a partner by means of the mobile phone. Each player follows directions (LEFT, RIGHT, U-TURN, etc) texted to them by their partner. The effect is to confuse and misdirect the players’ exploration of the city.

· In the second part of the game, players gather back at the staring point for a discussion led by the artists. The discussion will produce a collaborative map, turning the experiences of the players into a single pyschogeographic portrait of Copenhagen, as it appeared to those players, on an afternoon in early summer.

More:Follow the project via the Facebook group or by contacting Tijana Miskovic (+45 60623669/ mail@tijanamiskovic.com)