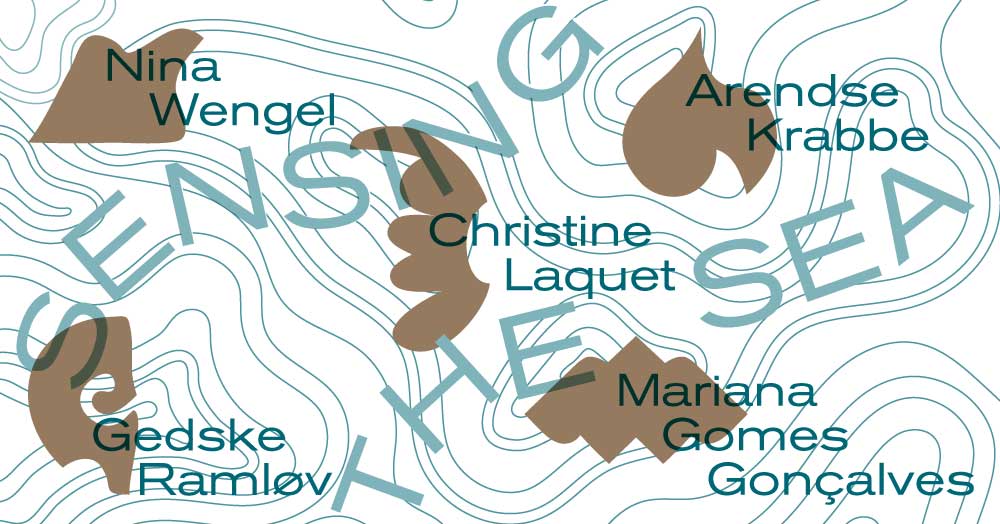 Allow me to lead you through Sensing the Sea – an exhibition in which five artists have had the opportunity to create new works, all related to the sea. The sea as a water mass, as a mental landscape, as a political space. The sea that we are a part of, and that is a part of us.

You will soon discover that the artists have used different kinds of formative methods and conceptual takes, but you will also perceive common features in their approaches to the subject. Each of them begins with their personal experiences, registrations, or opinions but only in order (then) to express themselves about the common matters that we share, in society and nature. With their eyes turned outwards to the world, these artists reach far beyond the private sphere, even as their points of expression remain personal.

Let’s take the journey through the exhibition together …

Christine Laquet initiates with a self-portrait with the sea. In the picture, her breath is condensed into dew and then turned into water. This transformation of the states of the water may illustrate her body’s encounter with the sea. An encounter that most of all could be described as a reflection or a mirroring. Coloured light comes through the window and draws us further into the exhibition. Accompanied by thirteen different shades of waves, we are immersed in the dark depths of the sea where plankton is mirrored in the stars, or is it the other way around? Can the seawater tell us about life on other planets, just like cosmic bodies tell us about ourselves? These questions, as well as the sound of the deep sea, has a cosmic tone going beyond the earthly. With this organic melody, we ascend to the surface again. We change perspectives and see the landscape from above. At a distance, the colours become warmer, perhaps because the materiality of the sea and the sand are mixing. Meanwhile, the surface glitters with plastic, which is imprinted with octopus’ ink and in layers, prevents the sea from breathing.

We began the exhibition with a breath, and we continue with an inhalation and exhalation as we step into Gedske Ramløv’s universe. By juxtaposing airways and waterways, Gedske creates an image of the lungs – of the organ that separates us from the beings of the sea and prevents us from living under water. This physical limitation is what, ultimately, causes the tragic death by drowning of many migrants attempting to cross the sea with their lives at stake. But the actual cause of their fatal destinies must be found in the outer geo-political borders. Thus, the capillary power of the water masses, the airways of the lungs, and the routes reflecting the migration politics melt together in Gedske’s drawings and photographs. The network is complex, the formats are large, and the work is made by hand, guided by patience and perseverance. The ambiguity of the works leaves us wavering somewhere between the figurative and the abstract, the real and unreal, day and night, in the grey zone where the landscape of the eternal nature relates to the one of current politics.

With lungs on our minds, we walk up the stairs to Mariana Gomes Gonçalves’ installation, which also engages the body. It does it spatially and auditorily. When we step into the work, our movements in the room are synchronised with the physical analogue sound. It is the sound of the coating the artist has applied to the magnetic tape – a process akin to the way wind and current create waves on the surface of the sea. We feel at sea. We are sailing and trying to stay on course towards the continent. One track of metallic sounds makes us become a vessel resisting the sea’s movement, while the other track of sounds from the depths of the sea makes us become one with the ocean. Our awareness is led towards the surface where the sea meets the air, and to the border where the sea meets land. The sound in the room is physical, and its undefinable melody and rhythm resonate in our bodies. When sailing, the rhythm of the sea dictates the motion, and to find its fixed point, the body must adapt.

Any rhythm is, fundamentally, based on repetition. Nina Wengel’s works depict the transition from day to night, possibly the most vital repetition for our orientation in the world. Repetitively and rhythmically as a heartbeat, the image of the sunset is painted in infinity. It could be any day of the week, month, or era. We could be in the past as well as the future. In the second series of images of the sun above the sea, we could even be anywhere in the universe. Nina’s sun does not necessarily look like our sun but could, just as well, be a sun from another solar system. The same goes for her sea which, instead of blue, just as often appears as red or black. Something simultaneously unknown and recognisable is taking place. This restless sense of longing and the dream of being somewhere else is, through the repetition, transformed into a sense of calmness and belonging to eternity. This transformation happens while the artist is standing at the port, looking across the sea. I suggest that we keep hold of the image of the water’s edge while we walk up the stairs.

It is at the water’s edge, we also find the sea foam, which is the main subject in Arendse Krabbe’s work. The sea foam, which has lived and experienced in the sea, reaches us at the shore as a witness to what happens in the open sea. Cyanotypes are imprints of shapes, in the same way that our recollections are imprints in our memory. If we assume that the sea foam has a memory, what would its molecules bear witness of, and what would we, as human beings, do to comprehend its message? The artist’s handwriting on fabric gives shape to the text in blue and white. Speculatively, and in the first person, the artist expresses her reflections on what the sea foam bubbles are marked by. In fragments, we distinguish the accounts about people for whom the sea is an escape route, and those about the environmental disaster. With an appeal for care and kindness, we are moved through the hanging fabrics, sensing the tragedies of migration and pollution – realities that are often overlooked or ignored but that the sea bears witness to and attempts to articulate.

Now you have experienced the exhibition from my perspective, but on the way back, you will probably find a number of other routes and connections because, as you might already have noticed, this is an exhibition characterised by its openness.

The artists, who so generously have opened their universes to the visitors of the SAK, are all women of different ages and from places connected to the sea: Svendborg Sund, the Sound, the Atlantic, and the Adriatic. As a curator, in choosing these artists and their works, I wished to create a space for both sensory experiences and critical reflections. I have intentionally let aesthetic and theoretical aspects float together because I do not think the sea can be comprehended only through science. It is my feeling that the artistic sensibility can contribute with a different, sensuous interpretation of the sea, which is just as important as the scientific one.

I imagine that the audiences viewing the exhibition are left with an impression of the complexities of the sea: the sea as something beautiful as well as dire, political as well as poetic, far as well as near. Especially in Svendborg, the town with the sea, the port, and a maritime history that have stimulated the openness of the city through generations, the exhibition will likely strike a particular chord. Aside from recognition, I hope this exhibition will offer inspiration to see the sea as a gateway to other times and places, and that the exhibition might then change one’s perspective, standpoint, or vision.