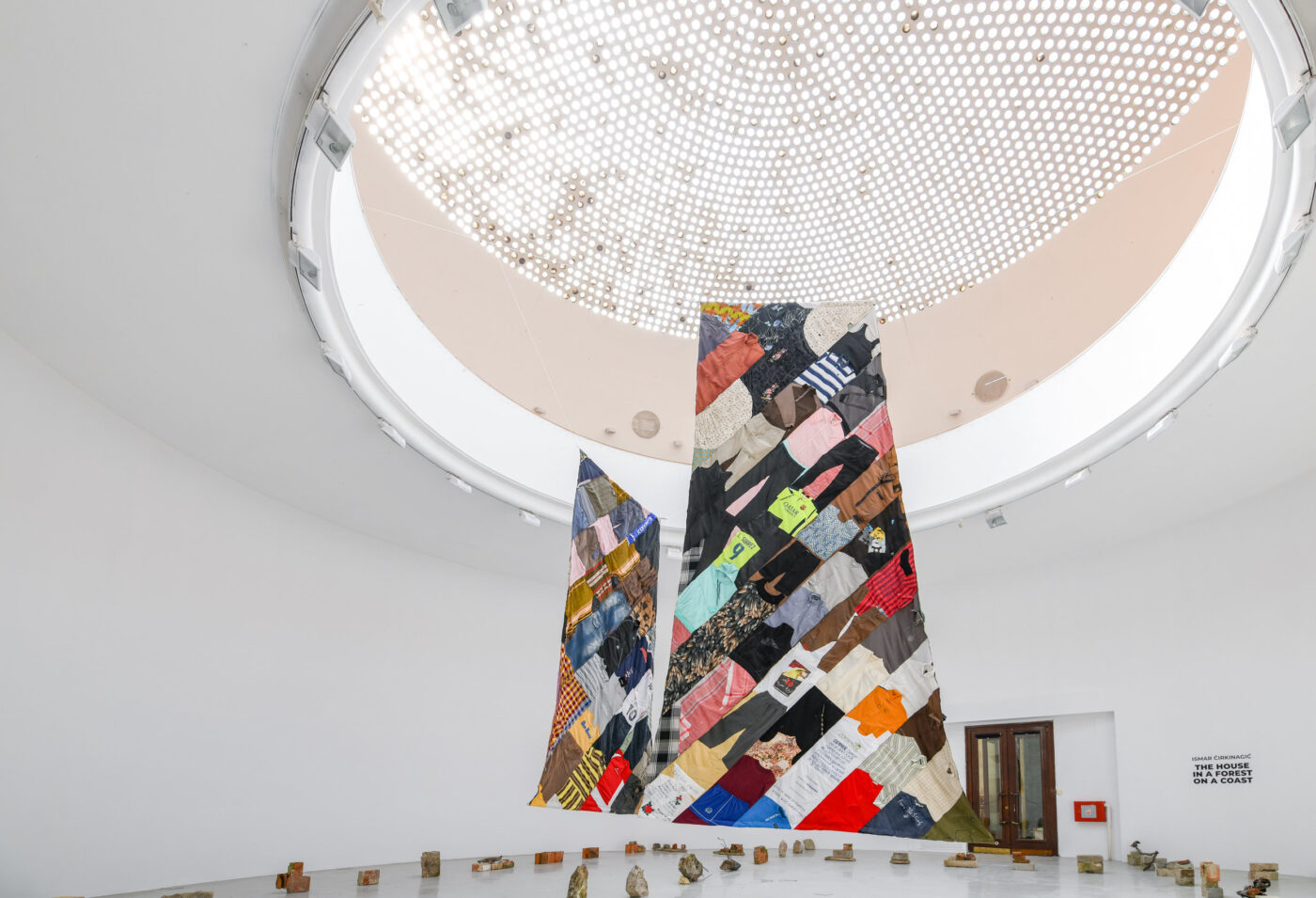 The House in a Forest on a Coast is a total installation composed of elements in various media of art. Each artwork can be considered independently, yet they all generate one joint experience by being conceptually and visually interconnected. The actual exhibition consists of two sculptural and one audio element, each of which occupies the exhibition space in several dimensions. Horizontally, there is a representation of a house foundation covering the floor, whereas a large-scale representation of sails on a ship is vertically stretched out towards the ceiling, amid which a sound piece auditorily unites the two aces by veiling over all the exhibited components and resonating in the space between them. 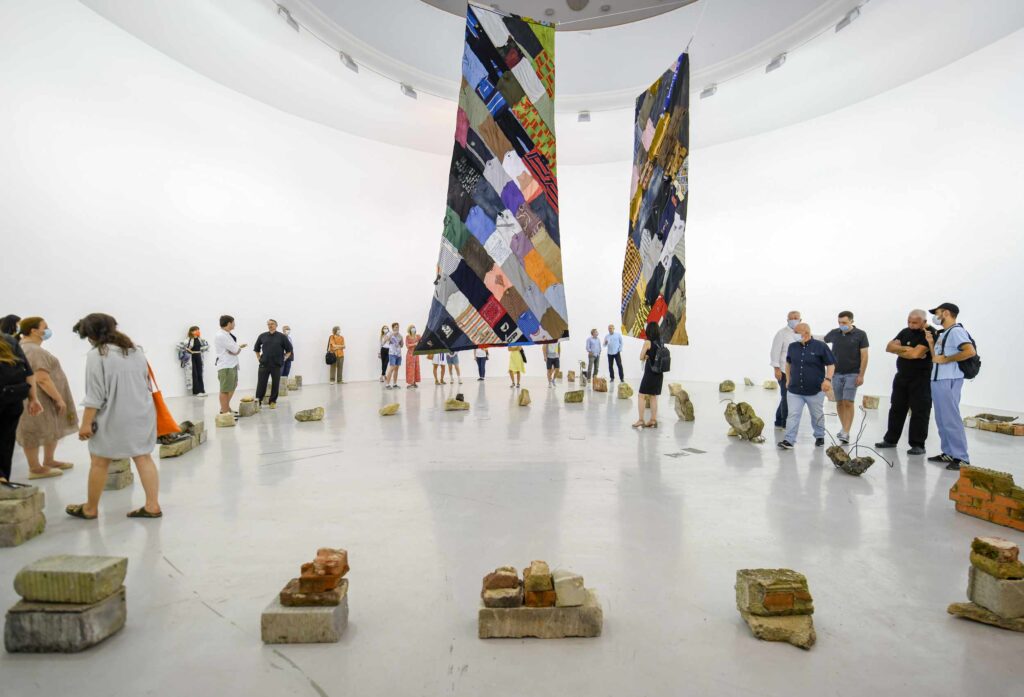 The house foundation is erected out of methodically positioned debris, such as destroyed walls, decayed building elements and damaged supporting structures from violent conflicts around the world. According to the artist, this systematic display of debris is a “re-enactment” of the Obsessive-Compulsive Disorder (OCD) routine, which often appears as a consequence of Post-Traumatic Stress Disorder (PTSD). Just as the debris convey memories about places that no longer exist in their original form, the clothes convey memories of bodies and persons who were once wearing them. The sails are, namely, sewn from the clothes that belonged to people who died as victims of violence with political backgrounds, such as armed conflicts, terrorist attacks and forced migration. The clothes have been donated by the victims’ families who have kept the garments in the process of mourning and remembering their lost relatives. Fragments of testimonies from victims’ families are the components of the audio work consisting of a poetic voiceover assemblage. […] Since these are not crafted by the artist, the collected (authentic) elements have a forensic potential to act as evidence of the man-made destruction they represent. As such, their significance goes beyond their purely aesthetic value as artistic material. By destabilizing the viewer’s code for looking at art versus cultural artefacts, the artist only amplifies the connection between art and (real) life, which saturates the exhibition as a whole. […] The result is an artistic organisation of mnemonic elements from different geographical and historical contexts on display next to one another, which invites the viewer to interpret the exhibition from the transcultural perspective of humankind, rather than from specific national orientations. In the exhibition, Čirkinagić encourages recognition across cultural, social and political divisions. His desire [is] to show the universality of the human experience by focusing on similarities rather than differences among humans. 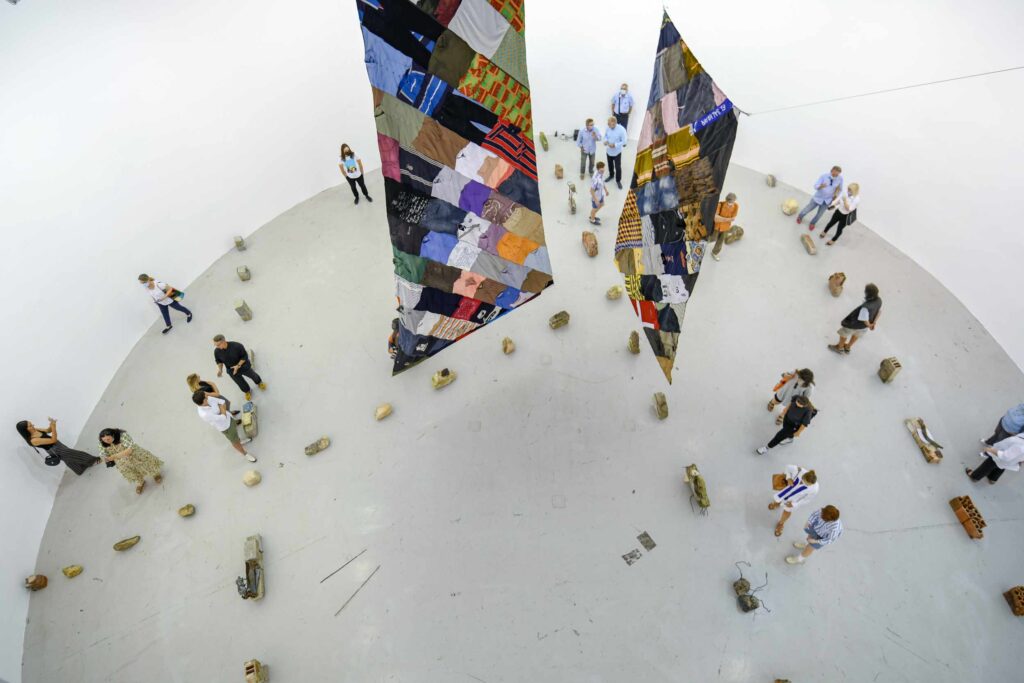 […] This empathic feeling of being connected with other human beings is also captured in John Donne’s prose work Meditation XVll: No man is an island from 1624, which has served as the artist’s main source of inspiration for the exhibition. Its opening line ”No man is an island/ entire of itself” and the final lines “Any man’s death diminishes me,/ because I am involved in mankind. / And therefore never send to know for whom/ the bell tolls; it tolls for thee.” are appositely paraphrasing the empathy with humankind. Oneness with humanity is thus the key to unlocking The House in a Forest on a Coast. 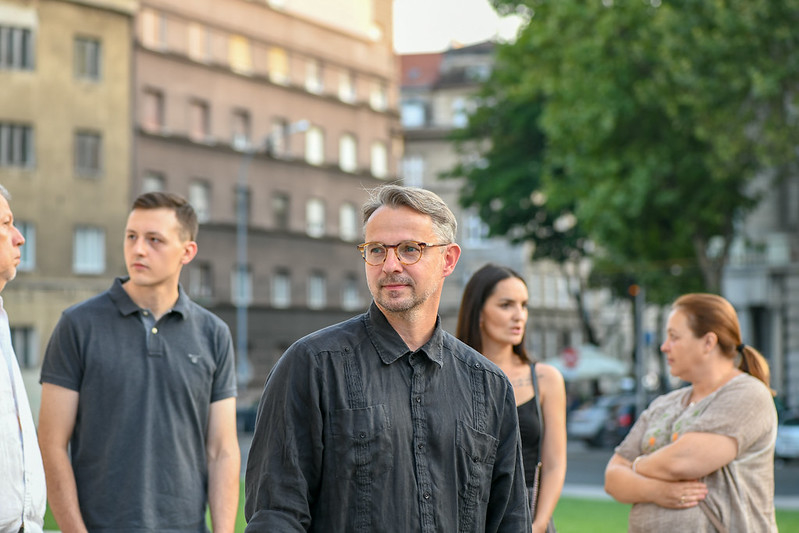 ABOUT THE ARTIST: Ismar Čirkinagić was born in 1973 in Prijedor, Bosnia and Herzegovina, which was a part of the Socialist Federal Republic of Yugoslavia. He came to Denmark in 1992, following the breakdown of the country and the brutal campaign of ethnic cleansing in his region of Northwestern Bosnia and Herzegovina. In 1997 Čirkinagić enrolled at the Copenhagen Art School and remained there until 2000 when he was admitted to The Royal Danish Academy of Fine Arts. Most of his artistic practice is thematically related to the socio-political themes and mainly produced in the form of a conceptual installation consisting of videos, photos, texts, and object-based elements. In recent years he has had exhibitions in museums and kunsthalles in Denmark and internationally. Čirkinagić’s artworks can today be found in several Danish public collections.